The sanctions were announced in a news conference at the White House by the US Treasury Secretary Steven Mnuchin and Secretary of State Mike Pompeo.

Mr. Pompeo said the individuals were “responsible for regime violence both at home and abroad”. He added that the US was “striking at Iran’s inner security apparatus.”

.SecPompeo on the financial decisions facing the Iranian regime today: Do they continue funding terrorist militias in the region? Or do they allow the Iranian people to live the life they want and grow their economy? 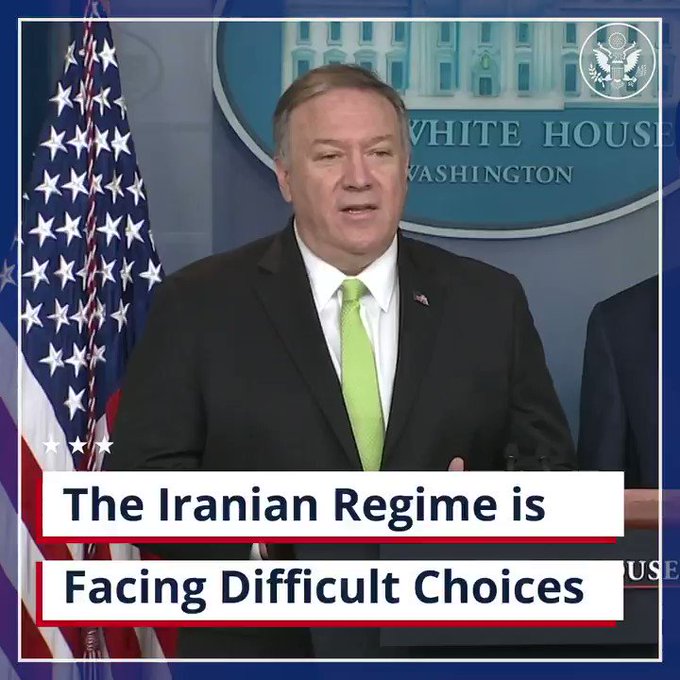 The U.S. Department of the Treasury released a statement in this regard.

“Today, the U.S. Department of the Treasury’s Office of Foreign Assets Control (OFAC) took action against eight senior Iranian regime officials who have advanced the regime’s destabilizing objectives, as well as the largest steel, aluminum, copper, and iron manufacturers in Iran, who collectively generate billions of dollars annually.  Treasury’s action includes the designations of Ali Shamkhani, the Secretary of Iran’s Supreme National Security Council; Mohammad Reza Ashtiani, the Deputy Chief of Staff of Iranian armed forces; and Gholamreza Soleimani, the head of the Basij militia of the Islamic Revolutionary Guards Corps (IRGC).  In addition, Treasury designated 17 Iranian metals producers and mining companies; a network of three China- and Seychelles-based entities; and a vessel involved in the purchase, sale, and transfer of Iranian metals products, as well as in the provision of critical metals production components to Iranian metal producers.” Reads the statement adding:

Concurrently with today’s designations, the President is signing a new Executive Order (E.O.) that targets additional sources of revenue used by the Iranian regime to fund and support its nuclear program, missile development, terrorism, and terrorist proxy networks, and malign regional influence. Specifically, this E.O. authorizes the Secretary of the Treasury, in consultation with the Secretary of State, to impose sanctions against persons operating in or transacting with additional sectors of the Iranian economy, including construction, mining, manufacturing, and textiles.

“The United States is targeting senior Iranian officials for their involvement and complicity in Tuesday’s ballistic missile strikes,” said Secretary Steven T. Mnuchin. “We are also designating Iran’s largest metals manufacturers, and imposing sanctions on new sectors of the Iranian economy including construction, manufacturing, and mining. These sanctions will continue until the regime stops the funding of global terrorism and commits to never having nuclear weapons.”

The statement reads in part:

OFAC is also designating Oman-based Reputable Trading Source LLC, which is owned or controlled by or has acted or purported to act for or on behalf of, directly or indirectly, Khouzestan Steel Company.  Reputable Trading Source LLC was incorporated to provide and supply the spare parts, equipment, and raw material that is required by steel companies, and further engages in marketing and exporting steel products from Iran.

OFAC is also taking action against the top companies operating in the Iranian aluminum and copper sectors.

Iran Aluminum Company was established as the first producer of aluminum bricks in Iran and accounts for approximately 75 percent of the country’s total aluminum production volume.  Also designated today are Al-Mahdi Aluminum Corporation, a top producer of aluminum in Iran, and National Iranian Copper Industries, the leading copper producer in the Middle East and North Africa region.  Khalagh Tadbir Pars Co. is a minerals trading firm that deals in iron ore, copper concentrate, alumina, and aluminum.

OFAC is designating Ali Shamkhani, the Secretary of Iran’s Supreme National Security Council (SNSC), who was appointed by the Supreme Leader in September 2013 as one of his representatives to the SNSC.  Ali Shamkhani, an IRGC admiral, is currently the secretary of the SNSC, which determines the country’s security and defense policies and coordinates political, intelligence, social, and economic activities in accordance with the Supreme Leader’s guidelines.

As the head of the SNCS, Ali Shamkhani plays a key role in the implementation of the Supreme Leader’s domestic and foreign policies.

Brigadier General Gholamreza Soleimani was appointed by the Supreme Leader on July 2, 2019, as the Commander of the Basij Resistance Force, a paramilitary force subordinate to IRGC. Among other malign activities, the IRGC’s Basij militia recruits, trains, and deploys child soldiers to fight in IRGC-fueled conflicts across the region.

Mohsen Rezaee is a longtime member of Iran’s Expediency Council and was appointed by the Supreme Leader.  The Expediency Council provides guidance to the Supreme Leader on all manner of policy.  Rezaee is a former IRGC commander who is suspected of involvement in the 1994 terrorist attack against the AMIA Jewish community in Argentina, resulting in the deaths of 85 people.  Rezaee remains wanted by Argentina and has an active international arrest warrant through Interpol.

Mohammad Reza Naqdi was appointed by the Supreme Leader as the Deputy Coordinator of the IRGC in May 2019.  Naqdi is the former Commander of the Basij, as well as a former head of the Basij intelligence unit who was responsible for the interrogation of those arrested during the post-election crackdown in 2009.  In this role, he extracted forced confessions from high-ranking reformist leaders broadcast on Iranian state-run television.  As a result of his actions in the aftermath of the 2009 protests, Naqdi was previously designated by Treasury in 2011 pursuant to E.O. 13553, a human rights authority.

Mohammad Reza Ashtiani and Ali Abdollahi are senior Iranian military appointees of the Supreme Leader.  Ashtiani was appointed by the Supreme Leader as Deputy Chief of Staff of the Iranian armed forces in July 2019, while IRGC Brigadier General Abdollahi was appointed the Coordination Deputy for the Armed Forces General Staff (AFGS) in July 2016.  Abdollahi is a former Deputy Commander of Iran’s Law Enforcement Forces.  OFAC previously designated the AFGS and its chief, IRGC General Mohammed Bagheri, pursuant to E.O. 13876 in November 2019.

Ali Shamkhani, Gholamreza Soleimani, Mohsen Rezaee, Mohammad Reza Naqdi, Mohammad Reza Ashtiani and Ali Abdollahi are being designated pursuant to E.O. 13876 for being persons appointed to a position as a state official of Iran by the Supreme Leader.

Ali Asghar Hejazi is a senior official within the Supreme Leader’s Office in charge of security.  Hejazi also maintains close links to the IRGC’s Qods Force.  Hejazi was previously designated in May 2013 pursuant to E.O. 13553, a human rights authority, for supporting the commission of serious human rights abuses in Iran on or after June 12, 2009, as well as for providing material support to the IRGC and Iran’s Ministry of Intelligence and Security (MOIS).

Hejazi and Qomi are being designated pursuant to E.O. 13876 for having acted or purported to act for or on behalf of, directly or indirectly, the Supreme Leader.

In addition, persons that engage in certain transactions with the persons designated today may themselves be exposed to sanctions.  Furthermore, any foreign financial institution that knowingly conducts or facilitates a significant transaction for or on behalf of the persons designated today could be subject to U.S. correspondent or payable-through account sanctions.