Berlin rally by supporters NCRI/MEK in support the Iran protests

Iranians living in Germany, supporters of the People’s Mojahedin Organization of Iran (PMOI), also known as the Mujahedin Khalq (MEK), rallied in Berlin on Thursday in front of the Iranian regime’s embassy in solidarity with the nationwide Iran protests and to commemorate the martyrs of the protests 40 days after their deaths.

The MEK has announced that over 1,500 protesters were killed by the Iranian regime’s forces in November. Reuters has also reported the same number of deaths. On Thursday, the families of the Iran protests’ martyrs in various cities of Iran held memorials for their loved ones despite unprecedented security measures.

The military and security forces were dispatched in different cities and were assigned to prevent any protests. The regime’s Ministry of Intelligence and Security (MOIS) made a concerted effort to prevent the families of martyrs from commemorating and mourning for their loved ones. The MOIS had also created an intimidating military presence in sensitive parts of the city and even in cemeteries.

The MEK supporters’ gathering in Berlin was held in solidarity with the rallies announced in various Iranian cities.

At the demonstration in Berlin, Iranians expressed solidarity with the families of the martyrs and condemned the regime’s ban on memorials for the martyrs in Iran.

Javad Dabiran, Deputy Director of the Berlin office of the National Council of Resistance of Iran (NCRI), called the regime’s heavy military and security measures in various cities, arbitrary arrests, especially of  relatives of the martyrs, and severe internet blackout as an “undeclared martial law.” He said the massacre of defenseless demonstrators during the November uprising by the clerical regime was a crime against humanity and urged the international community, especially Western nations, to take decisive and practical action.

Demonstrators in Berlin called on the German government to condemn the bloody suppression of the Iran protests as a “crime against humanity.” They also urged the German government to support the dispatch of a fact-finding mission to Iran by the European Union and the United Nation to investigate the regime’s crimes, not least since the reports obtained by the MEK confirm the death of over 1500 individuals, 4,000 injured and 12,000 arrests in 191 Iranian cities. They added that the fact-finding mission should travel to Iran and visit the prisons and thousands of detainees who are subjected to torture.

Iranian opposition leader Mrs. @Maryam_Rajavi has called on the @UN to urgently send an international fact-finding mission to the prisons to meet with the detainees. The #MEK has so far identified 601 of the martyrs by name.#IranProtests #Internet4Iran #StopIranBloodshed 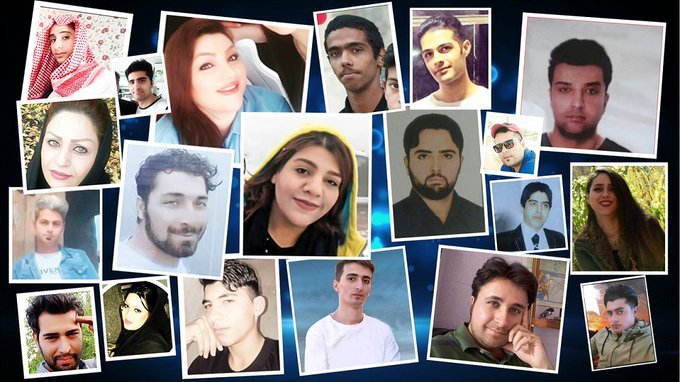