Written by Mansoureh Galestan on 29 December 2019.

Anglo-Iranian supporters of the People’s Mojahedin Organization of Iran (PMOI), also known as the Mujahedin-e Khalq (MEK), in the United Kingdom held a rally outside the Prime Minister’s Office in London commemorating over 1500 martyrs of the Iran protests on the 40th day of their death.

They paid tribute to the martyrs who gave their lives for freedom and the thousands who have been arrested and face torture and imminent execution.

Since mid-November, there have been mass protests in over 191 cities across Iran. Iran regime’s suppressive forces responded with a deadly crackdown. Over 1,500 peaceful protestors were killed, and 12,000 imprisoned without legal representation and other basic rights.

Iranian opposition leader Mrs. @Maryam_Rajavi has called on the @UN to urgently send an international fact-finding mission to the prisons to meet with the detainees. The #MEK has so far identified 601 of the martyrs by name. 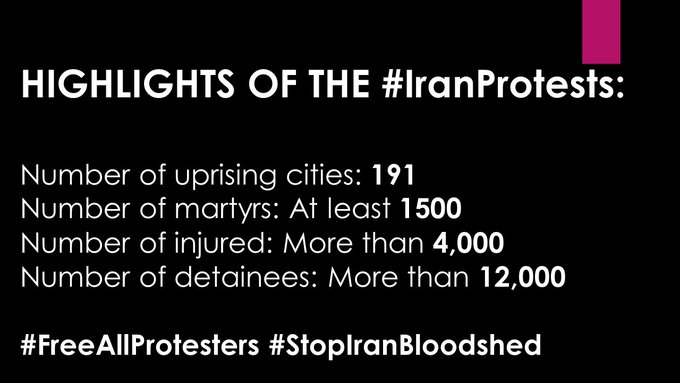 Attendees of the rally in London urged the UK Government and its international allies in the European Union and the United Nations to hold the Iranian regime accountable for its crimes against humanity. They demanded the international community put pressure on the regime to immediately release over 12,000 protestors.

The participants of the rally in London also urged the UK Government to press the UN Secretary-General and the UN High Commissioner for Human Rights to dispatch a fact-finding mission to Iran immediately in order to investigate the extent of the killings and visit the regime’s detention centers to monitor any mistreatment of prisoners in cases of torture and forced confessions. The MEK supporters also demanded the UK government called on the UN Security Council to declare the massacre of the Iranian protestors as a crime against humanity and bring those who are responsible for these crimes, including the regime’s President Hassan Rouhani and Supreme Leader Ali Khamenei, to justice.

Mr. Roger Lyons, former president of the Trades Union Congress (TUC), and former General Secretary of the Manufacturing, Science, and Finance (MSF) trade union, attended the rally in London. He said: “I congratulate you on your stand today calling for an end of the Ayatollahs’ regime in Tehran, and this year you are not alone. For 40 years, the fascist regime has ruled Iran but this time we are now in a 40-day period of mass resistance! We’ve had enough of 40 years of tyranny, and now we have seen 40 days of solidarity. I salute the thousands who have been standing up to the Revolutionary Guards, and I salute the thousands who have faced arrests and over 1,500 who have given their lives for freedom in Iran”.

Dr Hamidreza Taherzadeh of the National Council of Resistance of Iran (NCRI) also addressed the rally, stating: “I wish to pay homage to the victims of the recent uprisings and the fierce resistance that they have put up against the current dictatorship, and I admire the crucial role of the MEK’s Resistance Units who played a vital role in the recent uprisings in nearly 200 cities across the country. We stress that, unlike other uprisings in Iran, this time an army of young, educated, unemployed and those who have long been deprived of basic needs have all imploded on the streets to bring this regime down, and have bravely stood up to the brutal crackdown of the Iranian regime. With regards to the mass killings and mass arrests, the UN must bring the perpetrators of these crimes to justice, and on top of all to bring Ali Khamenei, the primary person who ordered these massacres, to justice immediately.” Dr Taherzadeh concluded that this will certainly be done soon by the people of Iran who will topple the regime.

In a statement released on December 26, the NCRI said: “Terrified of the eruption of another nationwide uprising on the 40th day memorial of the martyrs of the November uprising, the clerical regime not only cut off the Internet but also mobilized all of its suppressive forces, including the IRGC, the State Security Force, the Bassij, plainclothes and intelligence ministry agents, as well as the mounted and dismounted anti-riot units in many parts of Tehran and other cities in a frantic effort to prevent the ceremonies honoring the martyrs.”

Terrified of the eruption of another nationwide uprising on 40th day memorial of the martyrs of Nov.#IranProtests the clerical regime cut off the Internet &also mobilized all of its suppressive forces,to prevent the ceremonies honoring the martyrs.https://twitter.com/Mojahedineng/status/1210259653063409664 …

December 26 – Karaj, #Iran
“Our pain is your pain! People, join our ranks!”
“Viva Iran!”
“People did not die for us to compromise & praise the murderous leader!”#IranProtests 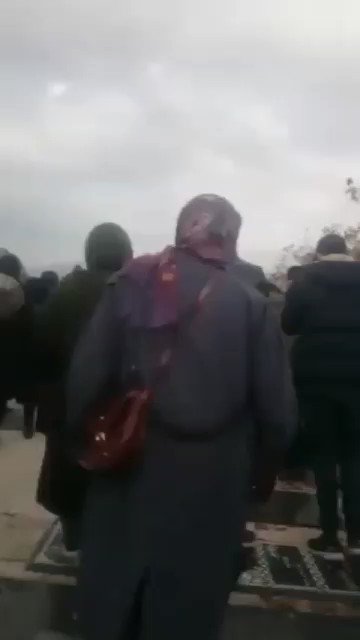 46 people are talking about this