The Strategy of Nukes, Missiles, and Executioner Doomed to Fail;

Participation and Speeches by Lawmakers and Parliamentary Delegations from Canada, Australia, and European, Arab and Islamic Countries

The three-day Free Iran World Summit-2021 continued on its second day with the participation of 15 European, Canadian, and Australian parliamentary delegations, five former Arab officials, and eight Arab parliamentary delegations. In total, 70 dignitaries gave speeches. The gathering featured Mrs. Maryam Rajavi, the President-elect of the National Council of Resistance of Iran (NCRI), and thousands of members of the Mujahedin-e Khalq (MEK) in Ashraf 3, linking together virtually tens of thousands of locations around the world, including gatherings of Iranians and supporters of the Iranian Resistance in 105 countries.

The delegations stressed the solidarity of the peoples of their respective countries with the Iranian Resistance for freedom and people’s sovereignty. They also expressed support for Mrs. Rajavi’s 10 Point Plan for the future of Iran, which calls for a democratic, peace-seeking, and non-nuclear republic based on separation of church and state and peaceful co-existence with its neighbors.

In her address to the second day of the Summit, Mrs. Maryam Rajavi, the President-elect of the National Council of Resistance of Iran (NCRI), referred to the election farce and said, “Installing Ebrahim Raisi, the mass murderer of the 1988 massacre as president, and consolidating power within the regime is a combative and repressive configuration as fortification against the uprisings. It affords Khamenei the latitude and leeway he needs for the nuclear and missile programs. Raisi is the most obedient and submissive functionary precisely because he is the most brutal one. Raisi has no maneuvering room to distance himself from Khamenei. His hands are soaked with the blood of 30,000 political prisoners in Iran in the summer of 1988, more than 90 percent of whom were People’s Mojahedin of Iran (PMOI/MEK). Of course, this is in addition to the thousands of executions he has ordered before and after that, during these 40 years.” 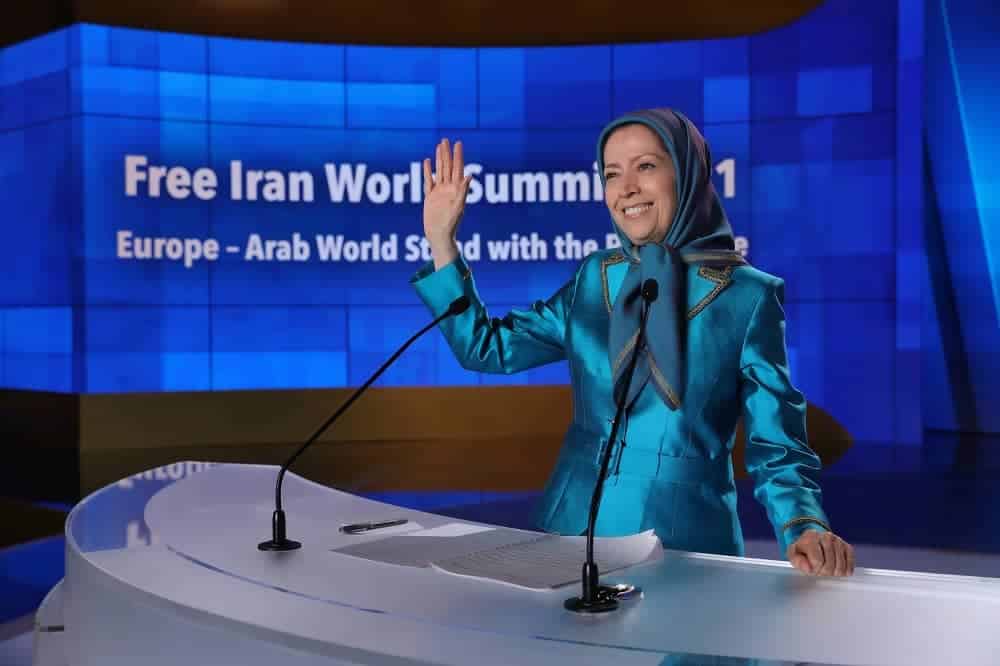 Mrs. Rajavi added: “Khamenei linked his and his regime’s fate to the nuclear program. Since 1991, the nuclear revelations of the Iranian Resistance have been more effective than all governments and international institutions in preventing the regime from acquiring the atomic bomb. The Western countries’ interactions with the mullahs’ regime have fed a vicious cycle of deception and appeasement. That is to say, while the regime has been hiding its nuclear program by deceiving the world, the international community has been trying to stop or curb this project by granting concessions or by showing complacency. But the regime used the nuclear deal to revitalize and expand its atomic program. The result is that Khamenei is building a bomb and will not stop. Any agreement he signs to reduce these activities, and any promise he makes, are pure lies unless it had already been disclosed by the Iranian Resistance or other sources.”

Mrs. Rajavi concluded: “Therefore, on behalf of the Iranian people and their Resistance, I declare that any agreement that does not completely close down the regime’s bomb-making, enrichment and nuclear facilities, any agreement that does not oblige the clerical regime to withdraw the Revolutionary Guard Corps (IRGC) from Iraq, Syria, Yemen, Afghanistan, and Lebanon is unacceptable. Because peace and tranquility in the Middle East and the world will again be taken hostage and sacrificed. Any agreement that does not oblige the mullahs to stop torturing and executing Iranians bears no legitimacy. Anything less, in any wrapping, is tantamount to caving into the mullahs’ nuclear catastrophe. The mullahs only understand the language of firmness and strength. To prevent them from acquiring the atomic bomb, the six UN Security Council resolutions must be implemented again, the regime’s enrichment must be stopped completely, nuclear sites must be closed, anywhere-anytime inspections must be launched, and the regime’s missile program must be brought to a halt. The UN Security Council must apply Chapter 7 of the UN Charter to the mullahs’ regime in Iran.

“Khamenei has concluded from the fall of the Iraqi and Libyan governments that access to an atomic bomb would guarantee his regime’s survival. But when uprisings like the one in November 2019 erupt, the centrifuges at Natanz or Fordow, regardless of their quantity or quality, will not save Khamenei.
The Iranian people’s uprisings and the magnificent Army of Freedom will overthrow the mullahs’ religious fascism, whether it is nuclear-armed or not.”

Secretariat of the National Council of Resistance of Iran (NCRI)